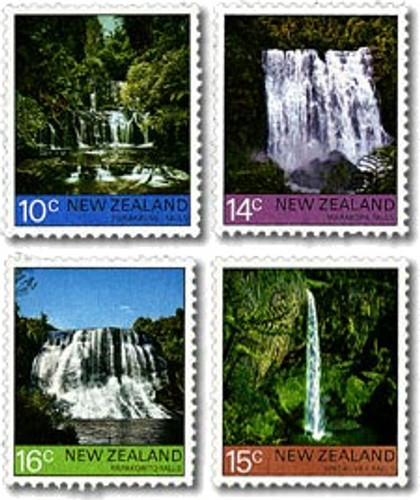 Four of New Zealand's most beautiful waterfalls featured in this series of stamps. As depicted on the stamps, each is different in character, sinuous delicate tiers of Purakaunui in the far South Island, contrast with Marakopa in the North Island - a crashing curtain of water.

Purakaunui Falls - 10c
Located 11 kilometres south-west of Owaka township in South Otago.  Purakaunui gives its name to a reserve, first established in 1905 and added to in 1970.  It now covers 494 hectares.  This reserve is mainly a silver beech forest.

Marakopa (Marokopa) Waterfall - 14c
This is the most violent of this set of four waterfalls.  It is found in a primal North Island setting on the Marokopa River in Waitomo County.  After negotiating numerous drops of up to 40 feet upstream, the river makes its final drop of 120 feet, onto jagged rocks below.   The river surges around and through small colonies of greenery, clinging grimly to large rocks in mid stream.  In a reckless, broken fashion it pours down, boiling and seething around boulders at the bottom.

Bridal Veil Falls - 15c
These falls were discovered in 1880 by an explorer named Powell.  Aptly named, they emanate in a long white ribbon of water from the grassy cliff-face, plunging 160 feet into a rocky basin.  The cliff from which the veil falls is scarred and undercut, partially overhanging the basin below.  Above its face the cliff is heavily wooded.  At the bottom a softly coloured carpet of greenery covers large rocks.  The old Maori name for Bridal Veil is Waireinga - leaping waters.

Papakorito Falls - 16c
This is one of several falls on the Aniwaniwa Stream, running through Urewera National Park.  The Park itself is a beautiful setting.  William Colenso, early New Zealand Explorer and Missionary wrote "Not a human being dwelt in all that immense tract of country on which my eager gaze then rested.  The grass grew, the flowers blossomed and the river rolled, but not for man.  Solitude all!"  Set in a low bushy area, Papakorito slips sharply over a broad cliff face broken in several sections by rocky outcrops.