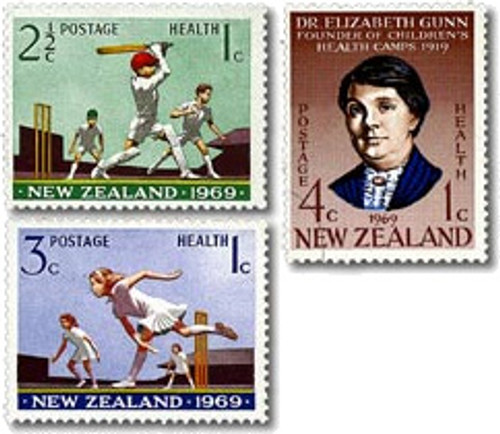 After a lapse of 14 years the Health stamp issue was again extended to include three denominations. This was due to the desire to commemorate the 50th Anniversary of the founding of the Health Camp movement by Dr Elizabeth Gunn MBE in 1919.

A sports theme was continued, with cricket chosen as the subject for the designs.  1969 also marked the 75th anniversary of the New Zealand Cricket Council and during that year the English women's cricket team toured New Zealand providing an additional reason for the choice of designs.   L C Mitchell completed the designs for the 2 1/2c + 1c and 3c + 1c and RM Conly the design for the 4c + 1c stamp.  The proceeds of the 'Health' value of health stamps were donated to the Children's Health Camps movement.