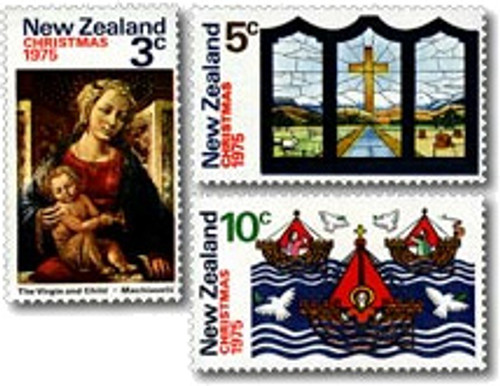 The 1975 Christmas Stamp Issue included an Old Master; a stained glass window; and an illustration based on a Christmas carol.

"The Virgin and Child" - 7c
The work of a 15th Century painter Zanobi Machiavelli (1418-1479).  The painting was donated to the Dunedin Public Art Gallery.  Machiavelli was an Italian painter of the Florentine School and was a pupil and assistant of Benozzo Gozzoli although his style was mainly formed through the influence of Fra Filippo Lippi and Pesellino.  The most thorough study of this artist is an article by Bernard Berenson published in 1958, in which he describes this painting as his best.

Christmas Carol - 10c
This stamp's symbolic design is based on the carol "I Saw Three Ships Go Sailing By" and the doves depicted symbolise the Christ Child's message of peace.

2018 Round Kiwi Set of Barcode A Blocks