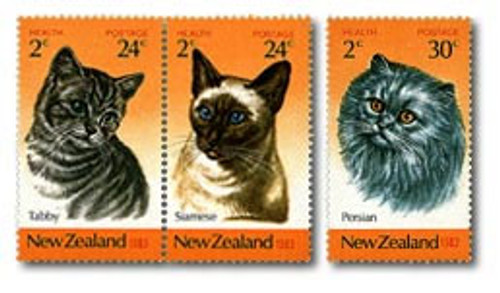 Three popular breeds of cat featured on the 1983 Health Stamp Issue. These stamps continued the domestic animal theme from 1982 and the designs featured a Tabby, a Siamese and a Persian cat.

Cats have been kept as pets all over the world for many centuries, but there were no cats in New Zealand before the arrival of Europeans. Since then the furry felines have made up for lost time and have firmly established themselves as a very popular pet with hundreds of owners proudly displaying them at shows held by cat clubs up and down the country. While there are over 50 breeds of cat, for show purposes, they are divided into three main classes - short hair British, short hair foreign, and long hair.

The Tabby cat was illustrated on one of the 24c + 2c stamp. The name Tabby was probably derived from a type of silk, also called tabby, that was originally from Baghdad. In England the breed was once known as the Cyprus cat, suggesting some link with the trade route through the Mediterranean, and Tabby's have also been known as Tiger cats. Pedigree Tabby's must conform to a carefully laid down pattern of stripes and bars which are not always possessed by ordinary domestic pets. A well-marked Tabby will also usually have a cleary defined 'spectacles' pattern around the eyes, and on the forehead a characteristic 'M' which according to legend commemorates the prophet Mohammed.

The Siamese is shown on the other 24c + 2c stamp. There are many legends about the origins of the various breeds of Siamese cats. They are native to Thailand (Siam) and development of the Siamese breed has long been attributed to the Kings of Siam. When the first standard was established in 1902 Siamese cats were described as "in every particular the reverse of the ideal short-haired cat". They are particularly admired for their svelte apperance, but it is not only their looks that made the Siamese one of the most popular of the pedigree breeds. They have a character all of their own, are particularly intelligent and become very attached to their owners, demanding attention all of the time.

The Persian cat features on the 30c + 2c stamp. Long-haired cats were unknown in Europe until 1620 when the first Persian was imported from Iran into Italy. The long hair of domestic breeds is not known in wild members of the cat family. Blue Persians have been considered by many to be the King of cats and they have often been used to improve the colour and type of other long-haired breeds. Queen Victoria owned two Blue Persians and helped to set the seal of approval on pedigree cat breeding by her interest and support.