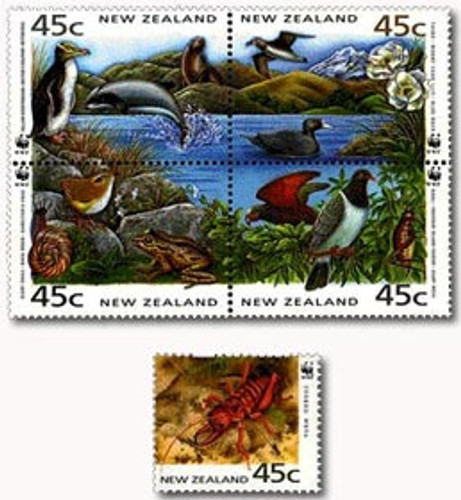 For a small country, New Zealand is well endowed with fascinating wildlife. Yet a disproportionately high number of our native species are at risk of disappearing; some are rare, others endangered or vulnerable and many are regionally threatened. For many, time is running out. Reassuringly though, a global awareness has helped turn the tide for some species.

This issue, with each stamp incorporating the World Wide Fund for Nature (WWF) logo, depicted 13 of New Zealand's rare and threatened species. Twelve appeared on the block of four stamps, which were also available in sheets of single stamps. Another, the Mercury Island tusked weta, was issued in a stamp booklet format. This small collection of birds, plants, animals, insects and sea life are representative of the hundreds of New Zealand species at risk.

The tusked weta, discovered in 1970, is found only on one tiny island in the Mercury group off the east coast of the Coromandel Peninsula. At 85 millimetres it is the largest of New Zealand's ground burrowing wetas but only the male has the large tusks which grow out of its jaws.