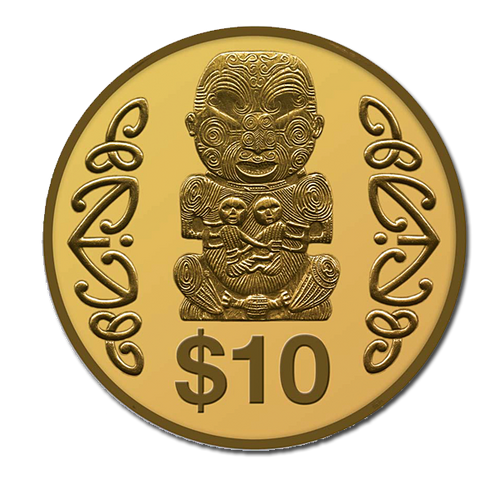 On 2 October 1997, the 'pukaki' one of New Zealand’s most precious tāonga (treasures) returned to its rightful home, exactly 120 years after it had left and New Zealand Post is privileged to present it as the centrepiece on this special gold proof coin.

Born around 1700, Pukaki the man was instrumental in his tribe’s defeat of the Tuhourangi tribe and the takeover of the lands of Pukeroa-Oruawhata, which is today the city of Rotorua. His intricately carved statue – the man transformed – depicts his strength, status and ‘mana’ among his people. Originally a gateway standing more than five metres tall, his lower portion was removed in the 1850s, turning him into a statue so that he could safely rest on his home marae in Ohinemutu.

In 1877, Pukaki was gifted to the Crown but became waylaid in the Auckland War Memorial Museum. There he stayed until the late 1970s, when he was selected for the international Māori art exhibition, Te Māori, which in 1984 toured a number of prestigious United States art galleries, including New York’s Metropolitan Museum of Art. Te Māori became one of the most memorable exhibitions ever to leave New Zealand’s shores – and by the time it returned home in 1986 Pukaki had become a nationally recognised identity.

Eleven years later, and after returning to the Auckland Museum, Pukaki was finally returned to his people in Rotorua so they could complete his gifting to the Crown initiated in 1877. Today, his future is secured under the Crown-funded Pukaki Trust: he is finally home and the pride of not just a tribe and a city, but of a whole nation.