2005 The Chronicles of Narnia - The Lion, The Witch and the Wardrobe Silver Proof Coin Set 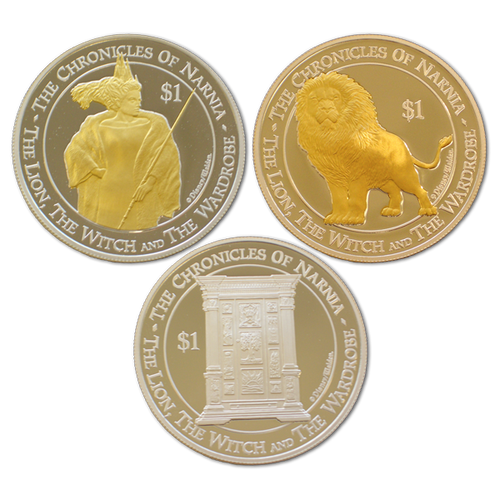 2005 The Chronicles of Narnia - The Lion, The Witch and the Wardrobe Silver Proof Coin Set

This silver proof three coin set transported you to Narnia that would forever remind you of a tale which has already transfixed generations of fans.

This three coin silver proof set, struck to the usual high standards of the Royal Australian Mint, featured the lion, the witch and the warbdrobe from The Chronicles of Narnia. Two silver coins of the lion Aslan and the White Witch were selectively plated with gold to enhance the coin's design. While the third coin that featured the Wardrobe had a delicately frosted raised image on a highly polished background. The obverse design for each coin contained Ian Rank-Broadley’s effigy of Her Majesty Queen Elizabeth II.

The three coin set also included information about each of the three characters.

The Great Lion, the King of the Wood, Aslan radiates solemnity and joy, strength and gentleness, fury and tenderness. When the children first hear Aslan’s name, they feel hope. When they first see him, his golden power nearly overwhelms them. But when he speaks their names, they know they have met their greatest and truest friend. His wisdom and compassion are as boundless as his courageous heart. The children must join Aslan and fulfil the ancient prophecy. And in the end nothing - not even the dark payment the White Witch demands of him - can bind him or contain his power. Aslan leads the children to the castle of Cair Paravel, where he crowns them Kings and Queens of Narnia in a joyous celebration.

Narnia is ruled by the cruel, icily beautiful White Witch. Her frosty elegance echoes the coldness in her heart. Hardened by pride and power, she has frozen Narnia. Though she calls herself “the Queen of Narnia”, the White Witch isn’t royalty - she’s a dictator, ruling through pure, icy terror. She took Narnia by force, and has reigned over it for one hundred terrible years. She knows the old prophecy that when four human children come to Narnia, her evil reign will end, so she commands Edmund to lure his brother and sisters to her and their doom. The children learn more about the Witch’s ruthless rule. She commands legions of evil minions and turns anyone who defies her into stone.

During a frenzied game of hide-and-seek Lucy ducks into a dusty, forgotten wardrobe and stumbles into another world: NARNIA. She meets Mr. Tumnus, the shy, kind-hearted faun who introduces her to this marvellous - yet dangerous – new world. Narnia is a country of magic, inhabited by talking animals and mythical creatures and ruled by the cruel White Witch. She has frozen Narnia, turning it into a place where it is “always winter, but never Christmas”. When Lucy returns, her family doesn’t believe her wild story of fawns and witches. Edmund is particularly mean even following her back to the wardrobe that night in hopes of mocking her more, making him all the more stunned when he sneaks through the wardrobe and finds himself in a snowy forest.

The Hobbit: The Desolation of Smaug Brilliant Uncirculated Coin Set