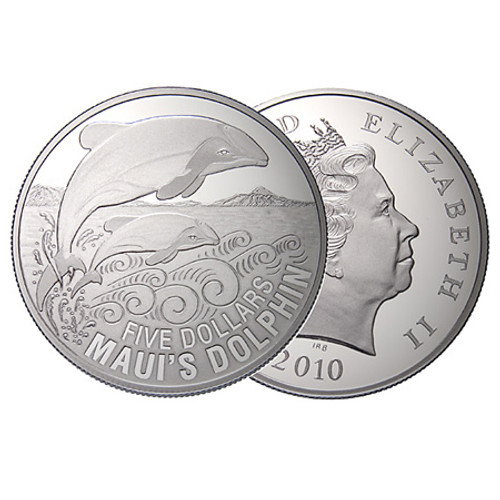 The silver proof coin is the perfect way to pay tribute to Maui's Dolphin.

Sail the waters off the North Island’s north-western coast and you may be treated to a sight of the world’s rarest marine dolphin – and the hero of New Zealand Post’s 2010 annual coin.

A Maui’s dolphin and its calf leap from the waves in the $5 proof-finish coin, struck in 0.999 fine silver and to a mintage limit of just 4,000 worldwide. The coastline in the background includes Mt Taranaki (or Mt Egmont as it’s also known) – New Zealand’s most perfectly formed volcano, which rises 2,518 metres above sea level. Considered ‘dormant’ rather than extinct, Mt Taranaki last erupted in 1775.