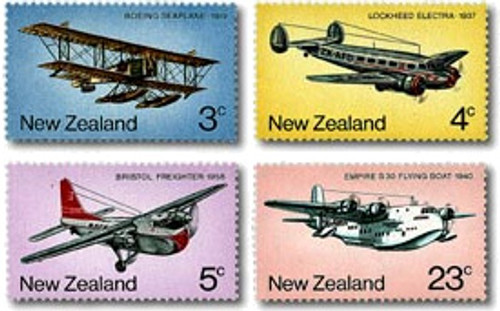 New Zealand's first unofficial air post delivery was made in 1914 when a parcel containing a letter addressed to a South Canterbury farmer was dropped from the cockpit of a bi-plane. Official airmail services began in 1919.

As part of an ongoing series featuring transport, this set of four stamps depicted aircraft involved in important stages in the history of New Zealand's airmail transportation.

Boeing Seaplane - 3c
On 16 December 1919 a Boeing Seaplane piloted by Captain Bolt, had the distinction of flying the first officially assigned airmail in New Zealand from Auckland to Dargaville.  The Boeing Seaplane covered the 112 miles in just over one hour thirty minutes.

Lockheed Electra - 4c
Introduced by Union Airlines in 1937, the aircraft, a 10 passenger craft with a 188 mph cruising speed was one of three later taken over by National Airways Corporation (NAC) now Air New Zealand.  "Kauka" the Electra featured on the stamp was the last used by NAC and it can now be seen in retirement at Auckland's Transport and Technology Museum.

Bristol Freighter - 5c
Essentially a cargo plane it was operated throughout New Zealand  by Safe Air Limited (previously Strait Air Freight Express Limited) and was a regular carrier of mail after 1958.