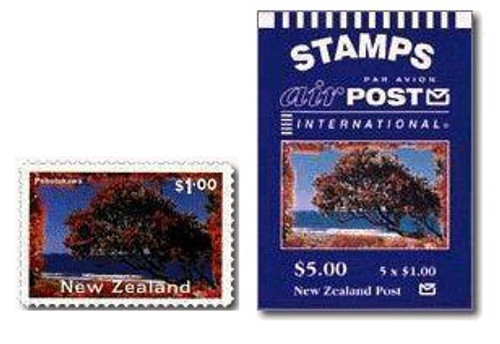 In 1995 New Zealand Post trialled a $5.00 booklet of five definitive 'Forest Ringlet' butterfly stamps. The booklet was hugely successful and sold out quickly. It led to a 1996 replacement AirPost Booklet, in a self-adhesive format, designed for long-term use.

The booklet became a convenient addition to New Zealand Post's range and was particularly handy for visitors - and New Zealanders - sending mail overseas. The $1.00 stamp at the time being the value needed for AirPost postcards, Aerogrammes and for letters to Australia and Pacific destinations.

The Airpost booklet stamp featured a magnificent full-flowering Pōhutukawa, commonly known as New Zealand's Christmas tree. The Pōhutukawa (Metrosideros excelsa) grows naturally on the northern coastlines of Northland, Auckland, Coromandel, Bay of Plenty and East Cape but also does well when planted elsewhere. At full age it develops, in the words of noted botanist J.T. Salmon, into "a massive, often twisted and gnarled" tree. In December and January the Pōhutukawa is covered with brilliant masses of deep crimson to blood-red flowers.

As well as the stamps, the booklet included five self-adhesive AirPost stickers.