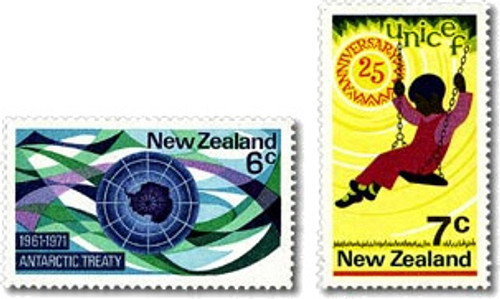 The 10th Anniversary of the Antarctic Treaty - 6c
The symbolic design is based on an impression of the constant high winds and swirling movement of the landscape - mountains, snowdrifts, storm-whipped seas and the transparent blues and greens which abound in Antarctic.

25th Anniversary of the United Nations International Children's Emergency Fund - 7c
UNICEF was established in 1946 with the object of protecting children all over the world against hunger, disease and ignorance.  The stamp design features a child on a swing symbolising the celebration of what has been achieved.