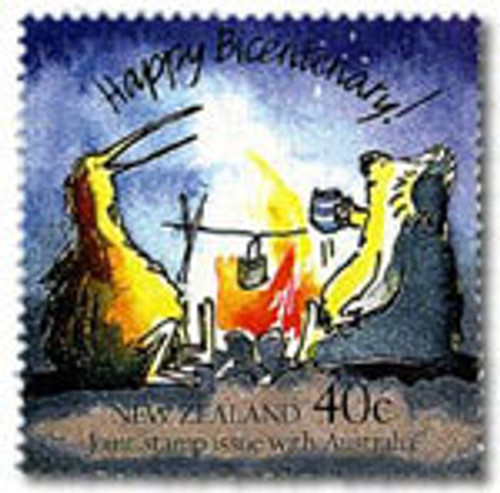 This design was issued in both New Zealand and Australia to celebrate Australia's 1988 bicentenary. It was a humorous campfire scene showing a Kiwi and a Koala yarning over a cuppa, probably discussing the last cricket test series.

New Zealand and the east coast of Australia were explored initially about the same time, in the late 1700s by Captain Cook. Australia's white settlement began 200 years ago (1788), a half century before New Zealand's and New Zealand was governed for a while from New South Wales. A friendship has grown between the two nations which has remained strong and unbroken. That friendship was cemented in World War I on the blood-soaked hills of Gallipoli, relying on each other even unto death.

New Zealand's gift to Australia to commemorate the bicentenary was a restored 12 metre gaff-rigged cutter, originally built in Auckland to represent New Zealand in the 1888 centennial regatta in Sydney.