This week we released the annual NZ Post Christmas stamps, continuing a long tradition that began 61 years ago. The first New Zealand Christmas stamp was produced in 1960 and depicted a reproduction of Rembrandt's painting of the Nativity. It all came about when the Festivals Committee of the National Council of Churches in New Zealand and the Rt. Rev. A K Warren, Bishop of Christchurch requested the Post Office produce a Christmas stamp. Things didn’t run altogether smoothly, there was some concern expressed at the time that as the stamps would be postmarked some people might object to the 'defacement' of stamps that carried a picture with such important spiritual significance. This issue was obviously overcome, and the stamp was released on 1 November. A single Christmas stamp was issued for ten years until 1970 when three were issued. This year four stamps have been issued along with a first day cover, miniature sheet (pictured below) and a miniature sheet first day cover. The 2021 design continues a long tradition of depicting the Nativity, and a contemporary approach with bright, bold colours was taken by NZ Post designer Cam Price. Over the years Christmas stamps have come in many different shapes and forms. They most commonly depict a traditional Christian Christmas theme, which seems to be the most popular according to the feedback we have received from our customers. Even so, occasionally we have deviated from the Nativity theme to show Christmas decorations or trees, Kiwi traditions like Christmas on the beach, or Santa Claus. A range of design styles have been employed too, from children’s artwork to the highly technical 2020 augmented reality stamps that treated people to an interactive 3D version of the Nativity. 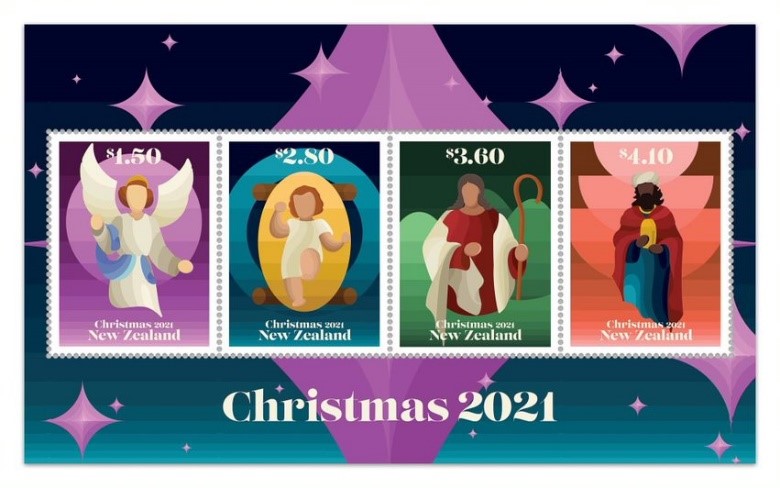 NZ Post’s stamps have consistently reflected changes in Aotearoa New Zealand. While Christmas is one of our longest-held celebrations, it is appropriate and important to reflect the increasing prominence of other traditions. Over the past few years, we have begun to reflect a variety of cultural celebrations and festivals representative of the various cultures, religions and communities that make up New Zealand’s population. 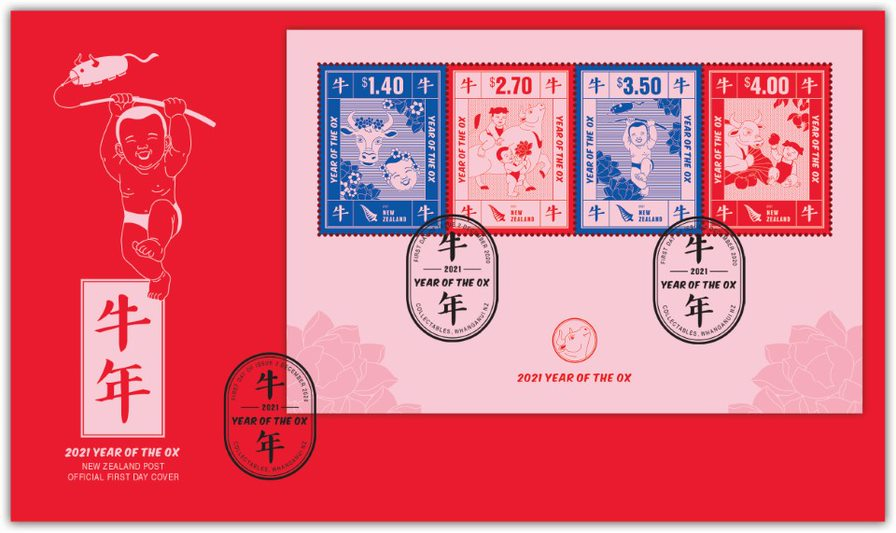 The Lunar New Year has become a popular stamp theme with the Chinese and other Asian communities both in New Zealand and overseas. We are now up to our 25th year. The 2021 stamps were designed by New Zealand-born Chinese designer Ying-Min Chu with illustrations by sister Niki Chu. Ying drew on her own cultural experience in New Zealand to design the stamps which were inspired by the nianhua posters she regularly saw around her during Chinese New Year at home. From portraits of immortal gods to illustrations of mythical stories, and depictions of beautiful babies, these stamps are packed with auspicious symbolism. For Ying they intentionally create a connection between Chinese New Zealanders and the ancient cultural practices of mainland China.

This year, for the first time, we celebrated the Hindu festival Diwali – the festival of lights. These bright, bold stamps were inspired by the many traditions and practices that happen during the Diwali festival here and around the world. Each stamp represents a particular element of this five-day festival. The first day is Dhanteras (Dun-te-rus) and is usually a shopping day, especially for gold or silver, new clothing, and gifts. The following day is for decorating the home - a clean entrance and rangoli décor will welcome the Goddess Lakshmi (depicted below on the miniature sheet) who brings good fortune and prosperity. The third day is the main day of the festival and usually includes a feast and fireworks, and prayers to Lakshmi and Lord Ganesha. Day four is dedicated to visiting friends and family, distributing trays of mithai (mee-tay) - sweets and exchanging gifts. Bhai Dhooj marks the end of Diwali. This day is solely dedicated to the strong bond between a brother and a sister. Traditionally, brothers will visit bringing gifts to their sisters, who in return, bless them with a special ritual and feed them with a meal and more mithai. 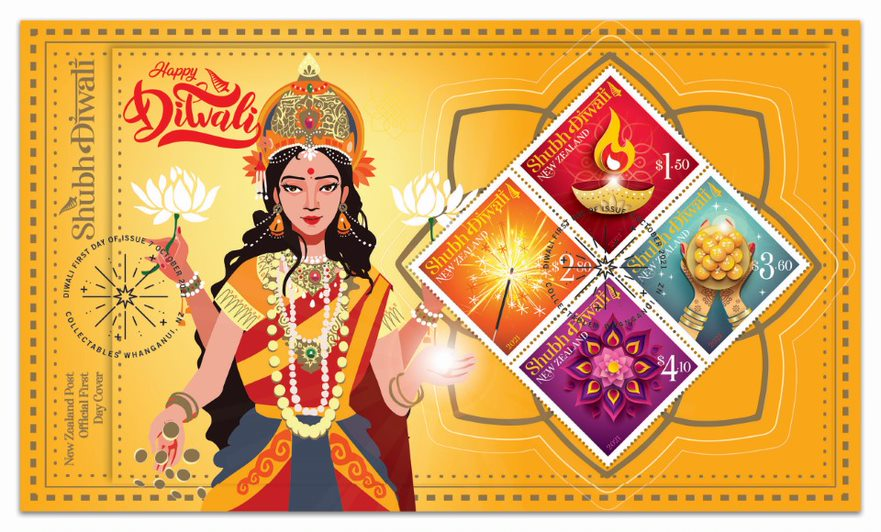 Shubh Diwali miniature sheet first day cover. The sheet depicts the Goddess Lakshmi and each of the four stamps represents a traditional practice undertaken during Diwali in Aotearoa New Zealand. The stamps were developed in consultation with Manisha Morar and the New Zealand Indian Central Association Inc. Image: NZ Post, 2021.

Matariki, the Māori new year, is another cultural festival that has regularly featured in the NZ Post stamp calendar. For 2022 we have yet another stamp issue, and this time we plan to tell the Matariki origin story. Along with the stamps will be a stunning set of collectable legal tender coins. Also in 2022, we plan to celebrate Eid-al-Fitr, acknowledging the end of Muslim Ramadan festival. This will be a first for NZ Post Collectables and I’m greatly looking forward to working with Muslim community representatives on the development of these stamps.