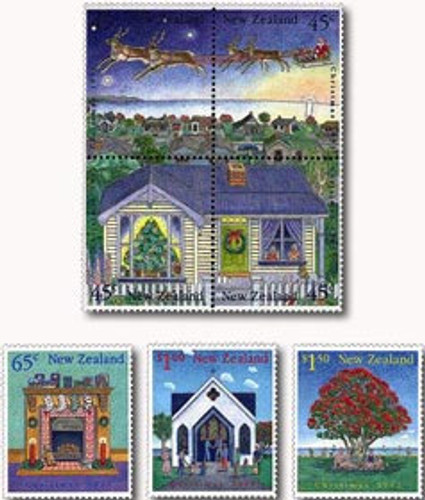 In the past, many Christmas stamps depicted the traditional story and customs which surround Christmas.

On the 1992 Christmas stamp issue the theme of 'Christmas in New Zealand' was adopted. On a pictorial block of four 45c stamps, Santa and his reindeer pass over streets dotted with kauri villas. Blossoming Pohutukawa trees front the beach and the blue of the sea and sky merge on the horizon as a bright summer day dawns.

Most New Zealanders have grown up with Christmas images imported from the Northern Hemisphere. Warmly clad children building snowmen, roaring fires and holly wreaths adorn our Christmas cards. But the reality of course, is quite different.