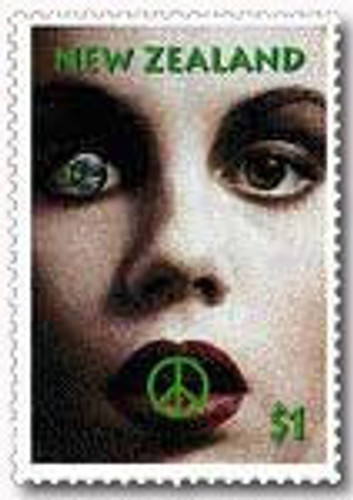 In August 1945, the United States dropped atomic bombs on Hiroshima and Nagasaki. The Japanese cities were destroyed and thousands of civilians killed; countless more died of radiation. The nuclear age had dawned.

Nuclear weapons have never been used in anger since, but the world has shuddered at the ugly mushroom shape of test blasts and once or twice has teetered on the edge of nuclear catastrophe. With the end of the Cold War, humans have stepped back from the brink but the United States, Britain, the former Soviet Union, France and China had stockpiled nuclear weapons and several other countries were also capable of producing nuclear weapons.

New Zealand Post issued this special stamp featuring the international peace symbol to communicate New Zealand's opposition to nuclear weapons and nuclear testing, and its hope that the world will one day be nuclear free.