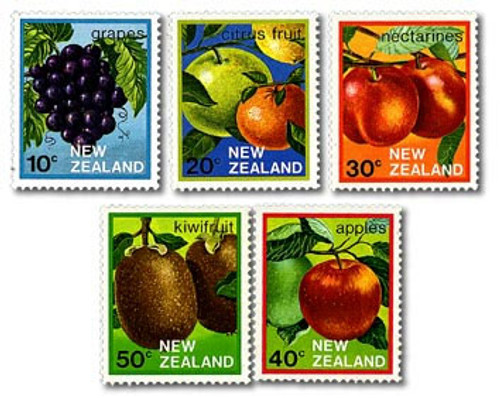 Grapes featured on the 10c stamp and have been grown in New Zealand in Poverty Bay, Hawkes Bay, Malborough and Auckland. The growing of grapes for wine-making began in the earliest day of European Settlement in New Zealand. The first recorded grapes were planted by Samuel Marsden at Kerikeri, in the Bay of Islands.

Citrus fruit appeared on the 20c stamp - a tangelo, grapefruit and lemon. The tangelo's name is derived form two fruits - the tangerine and the pumelo - and probably originated in China and South Eastern Asia about 4,000 years ago. Grown throughout Northland, Bay of Plenty and the North Island's East Coast, the seminole tangleo is a tart-sweet fruit which grows in consistently heavy crops.

New Zealand's climate is not hot enough for the true grapefruit varieties of citrus paradisi, but the so-called grapefruit (or poorman's orange) tolerates the lower temperature well. This was named goldfruit in 1981 and it was the most important grapefruit type grown mainly in the Bay of Plenty. Predominant varieties of New Zealand lemons are the Villafranca and its close relative the Genoa, also grown mainly in the Bay of Plenty.

The 30c stamp featured two varieties of nectarines - Fantasia in the foreground and Red Gold behind. Grown mainly in Central Otago and Hawkes Bay, nectarines, like peaches have a rich golden skin with a crimson blush. However in contrast to the peach's soft furry skin, the nectarine is smooth.

Apples featured on the 40c stamp - the Granny Smith and Braeburn. Granny Smith apples originated in Australia, where a chance seedling was discovered in 1850 by none other than "Granny Smith". The Braeburn was developed in New Zealand. In 1983 about 90 per cent of apples were harvested in Nelson and Hawkes Bay, with the remainder grown mainly in Otago and Auckland.

Bay of Plenty which has warm sunny days and crisp nights provides an ideal natural environment for kiwifruit growing and New Zealand's first kiwifruit vines were established here. The kiwifruit's flavour is unique and although a tropical fruit, in some markets it joined the ranks of apples, oranges and pears as a popular fruit. Kiwifruit has a high vitamin C content with 105mg to every 100g of fruit.