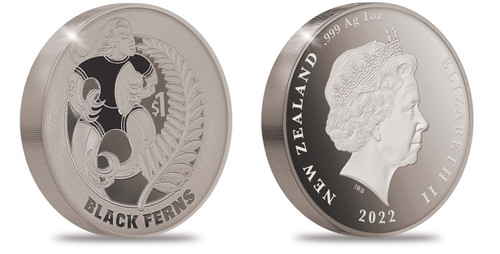 The Black Ferns boast one of the best winning percentages in international rugby, having won nearly 90 per cent of their Test matches since the team’s inception. Among their accolades are five Rugby World Cups, winning in 1998, 2002, 2006, 2010 and most recently in 2017. That same year ended with a landmark moment for women’s rugby when the Black Ferns became the first-ever women’s team to be named the World Rugby Team of the Year. NZ Post is celebrating New Zealand’s world-class women’s rugby team as they prepare to wear the black jersey on the world’s biggest stage at the 2021 Rugby World Cup.

This 1oz silver commemorative coin features a powerful Māori art illustration of a rugby player, representing the women who make up the champion team. She is accompanied by a silver fern and the Black Ferns logo sits below. This coin has a fine proof finish, and enamel has been used selectively to illustrate the iconic black uniform of New Zealand’s national rugby teams.