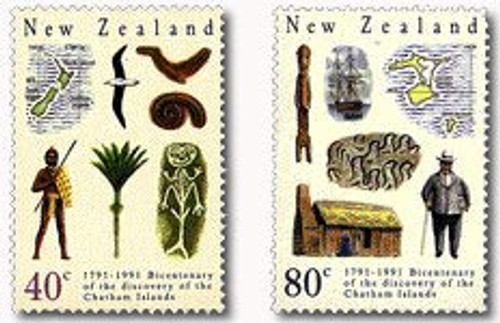 On 29 November 1791 Lieutenant William Broughton's storm driven brig 'Chatham' anchored off a large, unchartered island some 870 kilometres east of New Zealand. The long isolation of the island inhabitants, the Moriori, was over. Today, descendants of the Moriori who met Broughton on the sandy shore of Kaingaroa Harbour, are standing tall in a determined renaissance of their people. Some of their distinctive cultural emblems appear on the two stamps in this issue.

Moriori blood was spilled on the day of Broughton's arrival. Before then, the Moriori seem to have lived without warfare. The incident forebode worse to come for the Chatham Islands' non militant inhabitants. European sealers soon killed off most of the seal population, a major source of food and clothing, and also introduced diseases to which the Moriori had no resistance. Then in 1835 900 mainland Maori of Ngati Mutunga and Ngati Tama invaded and dispossessed the surviving Moriori with much bloodshed.

At the time of William Broughton's arrival, there may have been up to 2,000 Moriori living in family settlements of 10-50 people. Today, the Chatham Islands are home to a resourceful community of 750 people who farm and fish successfully in the harsh environment, and trade their produce for supplies from the New Zealand mainland.