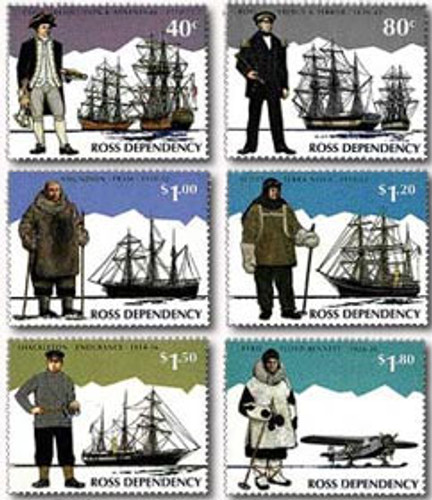 Antarctica's land mass is nearly as great as that of Europe and the United States of America combined. Today several countries have jurisdiction over sections of Antarctica. New Zealand's Ross Dependency is among these, a tract of land stretching from the Ross Sea to the South Pole, which includes the largest ice shelf in the world.

History records that early Antarctic explorers had an abundance of faith, conviction and fortitude, enabling them to set out over the boundaries of known horizons in the name of progress. Their brave exploits could be likened to those of modern space pioneers - stepping into the unknown in the belief that the rest of the world would benefit from their findings.

This stamp issue features six great Antarctic explorers. They are each pictured with the ships/aeroplane upon which they relied during their expeditions.