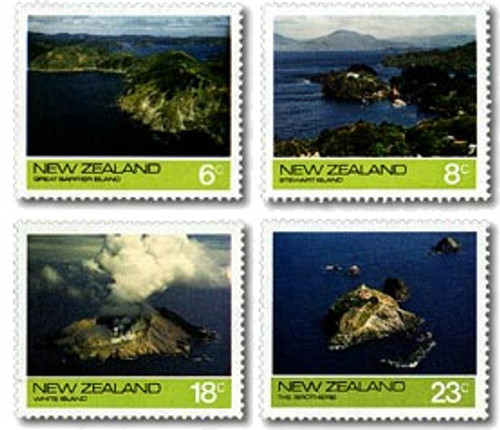 Off Shore Islands was the theme of the 1974 Scenic Stamp Issue.

Great Barrier Island - 6c
Great Barrier Island, known to the Maori as Aotea - the land like a white cloud - was first sighted by Captain Cook in 1769.  Some 259 square kilometres in area the island lies 88 kilometres north east of Auckland.  Though its highest point (Mount Hobson) is only 621 metres, its surface is extremely rugged with rock bluffs rising steeply from the sea especially along its western shore.  Settlement is restricted to scattered clusters on the margins of this rugged island, notably at Port Fitzroy and Okiwi in the north west, and at Onawa, Oruawharo, Okupu and Tryphena in the east and south.  Proximity to metropolitan Auckland makes the island attractive as a holiday resort.

Stewart Island - 8c
Stewart Island was known to the Maori as Rakiura 'The Island of the Glowing Sky'.  It received its present name from William Stewart who was the first officer of the brig Pegasus which called there in 1809.  Separated from the South Island by Foveaux Strait the total land area is approximately 1735 square kilometres.  The coastline is very ragged, deeply penetrated by the branching Paterson Inlet in the north and Port Pegasus in the south, and fringed by rocky offshore islets.  Most of the permanent residents of Stewart Island live in the township area around Halfmoon Bay.  Some 40 per cent of the residential buildings are holiday houses or cottages.  The view shown on the stamp is from Observation Point.

White Island - 18c
Known to the Maori as Whakaaii, the meaning is obscure.  It was first sighted by Captain Cook on 31 October 1769.  "I have named it White Island because as such it always appeared to us".  White Island is a rhyolite volcano which forms an island in the Bay of Plenty 51 kilometres north of Whakatane.  White Island lies at the northern end of the Taupo-Rotorua Volcanic Zone within which occurs the bulk of New Zealand's modern hydrothermal and volcanic activity, although the zone is by no means the only active volcanic zone.

The Brothers - 23c
The Brothers are a small island group situated in Cook Strait.  The lighthouse on the Brothers is the nearest to an English light station such as Eddystone or Wolf Rock that there is in New Zealand.  The light was first operated in September 1877 and was electrified in August 1954.  Standing 78.6m above sea level the tower is 12.4m and the light, flashing each 10 seconds is visible for 35.4 kilometres.  Tuatara, a nocturnal reptile, and one of New Zealand's most unique animals, inhabit The Brothers as well as the adjacent Stephens Island.  The Tuatara is the only surviving representative of an otherwise extinct order of "beak headed" reptiles, the Rhynchocephalia, which lived some 200 million years ago in Asia, Africa, Europe and North America and became extinct more than 100 million years ago.