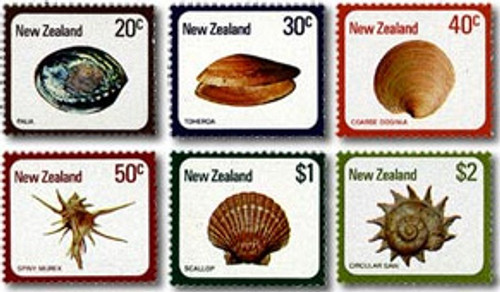 New Zealand seashells were featured on a set of definitive stamps.

Paua (Haliotis iris) - 20c
Paua can be found on the open coast around New Zealand and the Chatham Islands.  The animal is black and the interior of the shell has cloudy waves of rainbow colours, blues and greens being dominant.  The shells were used by Maori to add a gleam of life to eyes in their wood carved figures.  Today these shells are processed into attractive jewellery and curios.
Issued 29 November 1978

Toheroa (Paphies ventricosa) - 30c
The toheroa was greatly prized as a culinary delicacy.  In the 1970s they became so popular that the Marine Department imposed strict limits to the season during which they can be fished, the size to be taken, and the quantity for each person.  The shells are very brittle and easily damaged, and one regulation was that only hands could be used for digging. They are found at low tide 120 to 150 centimetres below the surface from where they feed on microscopic marine life sieved from the water through their long siphons.  Today they are fully protected.
Issued 29 November 1978

Coarse Dosinia (Dosinia anus) - 40c
A member of the worldwide Venus family of shells remarkable for their variety of surface sculpture.  This particular shell lives buried in sand below low tide on open sandy beaches.  It is large, heavy, and disc- shaped with strong sharp ridges on the outside.
Issued 29 November 1978.

Spiny Murex (Poirieria zelandica) - 50c
A member of the family of Murex shells.  The finest specimens come from deep water.  Those washed ashore invariably have broken spines.  The shells are sometimes found in rock pools with hermit crabs in residence.
Issued 29 November 1978

Scallop - $1.00
The scallop can be found in most New Zealand harbours at and below low tide and is not uncommon on many ocean beaches after storms.  There is a wide variety of colours and patterns. It is a popular culinary delicacy and is fished commercially at Nelson.
Issued 26 November 1979

Circular Saw Shell - $2.00
The circular saw or star shell is one of the finest and most interesting of a world-wide family and is deservedly popular with collectors.  Good specimens are not easy to obtain as they live at medium depths on sandy bottoms, seldom washing ashore in good condition.  Although found all around the New Zealand coastline the best and largest specimens seem to be from Foveaux Strait, where they are sometimes dredged by oyster boats.
Issued 26 November 1979

2021 The Lord of the Rings: The Fellowship of the Ring 20th Anniversary Set of Mint Miniature Sheets