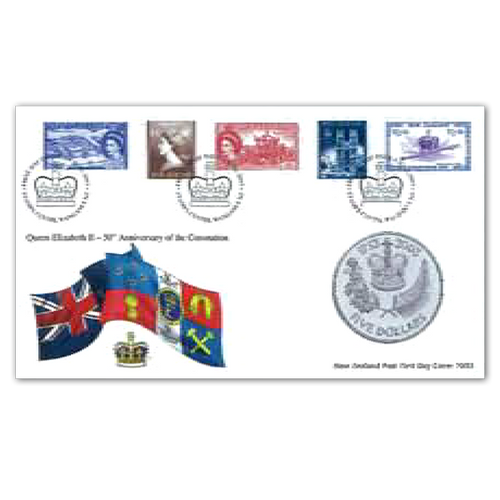 To share in the celebrations of the Queen's Golden Jubilee, we issued this numismatic cover that featured a stunning sterling silver coin.

New Zealand's commemorative silver frosted proof $5 coin depicted an image of the Sceptre with the Cross. A revered symbol of Royal authority and a key part of the Coronation ceremony and Royal regalia, the Sceptre symbolises the Queen's temporal power over her people. It is dominated by the fabulous Great Star of Africa - the world's largest cut diamond when set into the Sceptre in 1910.

The coin in this philatelic numismatic cover (PNC) was made of 0.925 sterling silver and had been selectively plated with 22-carat gold to highlight Queen Elizabeth II's potrait on its obverse side.

This special product was strictly limited to a quantity of just 100 covers.